Nearly finished with Chapter One of the rewrite of my WIP, Villainous Heart. Then need to do the outline for my NaNoWriMo project before working on Chapter Two’s rewrite. So that’s where I am on all of that.

In the midst of all that, I’ve been going back to more reading alongside some of my favorite video games. And my favorite author just released a new book! 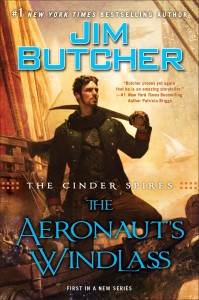 Since time immemorial, the Spires have sheltered humanity, towering for miles over the mist-shrouded surface of the world. Within their halls, aristocratic houses have ruled for generations, developing scientific marvels, fostering trade alliances, and building fleets of airships to keep the peace.

Captain Grimm commands the merchant ship, Predator. Fiercely loyal to Spire Albion, he has taken their side in the cold war with Spire Aurora, disrupting the enemy’s shipping lines by attacking their cargo vessels. But when the Predator is severely damaged in combat, leaving captain and crew grounded, Grimm is offered a proposition from the Spirearch of Albion—to join a team of agents on a vital mission in exchange for fully restoring Predator to its fighting glory.

And even as Grimm undertakes this dangerous task, he will learn that the conflict between the Spires is merely a premonition of things to come. Humanity’s ancient enemy, silent for more than ten thousand years, has begun to stir once more. And death will follow in its wake…

Jim Butcher writing Steampunk/Gaslamp. Excuse me while I go have another fangirl moment.

I love Butcher’s first, and still on-going, series, The Dresden Files. I was introduced to them via my Dungeon Master at the time (yes, I am a D&D nerd on top of everything else) and fell in love. His books were to me my introduction to the Urban Fantasy genre, much as Terry Brooks and David Eddings were my introduction fantasy. That is to say, they hold a very special place in my ranking of best things ever.

That’s not to say I don’t recognize that Dresden has a very slow start. Or that I don’t realize that his second series, Codex Alera, doesn’t drag in parts or feel a bit muddled.

But I wanted to start there so it’s understood that when I say that this new book, new series, of his really show his growth and maturity as an author and that I may have a new favorite series here, you all understand why this is important to me.

This book is fun. Let’s start there. It’s action packed, with amazing sights and sounds. There are airship battles! Crystals and ether! Cats that talk! A cast of characters that include the brash heiress to the largest noble House, the heiress to a minor noble House who thinks the nobility are crazy, a not-quite-a-pirate airship captain, an etherealist who’s just this side of crazy, and a cat!

Yes, I absolutely love Rowl, the cat. This is one of the best non-human POVs I have read in a while.

As to the plot, it’s a great opening for a series. It starts off small, and by that I mean that we are only concerned with events that are going to directly affect the home of the characters. Their Spire is now under attack and they have to find those that would harm it. And this is perfect because it gives an opportunity to get to know our mains and the setting without getting lost in a larger plot or dragging us down with a slow building one.

And I am trying desperately to do this review without spoiling the book.

So what I will say is that if you love a good plot with fun characters, you need to check out this book. There’s a character in here who you will connect to, I’m sure, out of the cast. If you like the steampunk or gaslamp genres, you should check this out. And if you love Jim Butcher like I do, you should check out this book. You will not be disappointed.

If you’re not sold yet, Butcher’s site has the prologue and first four chapters up, as well as links for purchase.

One thought on “Book Review: The Aeronaut’s Windlass”